If you are a cat owner, chances are you have considered which litter to use, and you may have had to choose between clumping and non-clumping cat litter. In addition to these types of litters, there are also a wide variety of types, including odor-reducing litters, multi-cat litters, and low-tracking litters.

Choosing whether or not to use clumping vs non-clumping cat litter depends upon you and your cat, and there are several things you can consider before going out and purchasing a commercial litter. This article will look at the pros and cons of clumping and non-clumping litters, and provide you with some information that can help you decide.

What Is Clumping Litter?

Clumping cat litter is often made of clay and finer particles than non-clumping litters and is composed mainly of sodium bentonite, a chemical that clumps together and binds with the litter when it gets wet. Clumping clay litter has been around for years and was originally designed to absorb and bind waste so that it can be easily removed without having to empty the whole litter box.

What Is Non-Clumping Cat Litter? 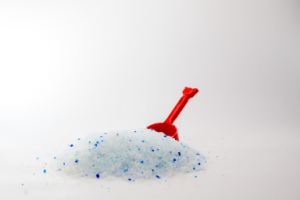 Non-clumping cat litter has been around for over 60 years and is typically made of calcium bentonite, a type of clay that can absorb its weight in water before reaching a saturation point. When it becomes saturated, then it can no longer absorb more moisture and should be removed. There are also a bunch of types of this kind of litter made from natural materials such as corn, wheat wood pellets, paper, and more. Silica gel crystal litter is another type.

Both types of litter come in low dust, dust-free, scented, and unscented, and some range in particle size from fine to large.

What Are The Pros Of Clumping Litter? 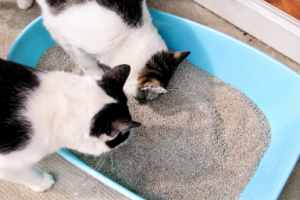 There are certain advantages of using the clumping type, and these include the following.

Once the litter is clumped together, it can be easily removed from the litter box along with any other waste. Since the soiled litter from urine and solid waste clumps together nicely, it’s convenient to just scoop it out without having to remove the surrounding litter which is typically clean.

Because it binds moisture together efficiently, this type of litter does not need to be switched out as often.

What Are The Cons Of Clumping Litter?

Unfortunately, it tends to be a bit more expensive than non-clumping litter, and depending on the brand, some owners can spend over $20 for a 20lb container.

Clumping litter also tends to be heavier due to the density of its clay particles.

Although clumping cat litter does have its advantages, litter boxes still need to be emptied, cleaned, and refilled with new litter at least twice monthly. However, if you have a cat who urinates frequently, or you have a multiple cat household, you may need to change the litter more often than that.

What Are The Pros Of Non-Clumping Litter?

This cat litter tends to be 25-50% cheaper than most clumping cat litters.

The sodium bentonite in non-clumping cat litter is great for absorbing urine and waste and is useful for cats who do urinate a lot.

Kittens love to play in litter boxes, and in some cases, they may eat it. Providing non-clumping for a kitty is recommended because they are less likely to eat it. These litters tend to be natural so it is much safer for your kitten’s health if they consume them.

They are also especially efficient at removing urine odors because they can absorb large volumes of urine. It is not as good as its clumping counterpart, but you could use a deodorizer like baking soda to fix any issues with smell.

What Are The Cons Of Non-Clumping Litter

Since non-clumping litter does not soak up moisture into a single, scoopable clump ball as clumping cat litter does, owners may notice that it needs a complete change more often.

Most cat owners know that removing soiled litter can be a challenge without changing the litter box, and many may opt to change the litter at least once weekly.

Is clumping or non-clumping litter better?

Is clumping litter bad for cats?

Clumping is not necessarily bad for cats, and when it comes to litter, it’s the dust that is the biggest problem. Both clumping and non-clumping cat litters do produce dust, and although there are products available that can cut down on dust, litter dust can be a nuisance and an added allergen for both cats and humans. Also, some cat parents may be concerned about litter ingestion, but this depends on the amount of litter ingested. On the whole, a cat would have to eat a large volume of litter for it to be a problem.

The answer to this is it depends on your cat, and the best way to tell if your cat prefers clumping cat litter is to give her a choice. Start by setting up two litter boxes with each type of litter, and see which one is your cat’s favorite. In many cases, cats will use the litter that they prefer more often.

There are many advantages and disadvantages to using clumping vs non-clumping cat litter, and the choice comes down to you and your cat. Determining which type of litter is best is both a choice of convenience, lifestyle, and pet preference.