Creating the perfect litter box set up that fits both the needs of you and your cat can be a tedious task, but once you find what works and what doesn’t, it is pretty rewarding. Figuring out the type of litter to use, the number of litter boxes to own, the proper location for each, and so many more factors takes a lot of trial and error. It all comes down to experimenting with the best practices recommended by cat experts to learn what works for your cat.

A small detail that plays a large role in whether or not you may have litter box-related issues is deciding how deep should cat litter be. Cat litter should be about 2 – 3 inches deep. This depth or around this depth is ideal is because it provides your cat with enough room to cover and bury their waste but there isn’t too much litter where leads to other problems such as creating a mess around the box, wasting money, and other similar issues to arise.

Problems With Using Too Much Litter

Using too much litter is a bad idea.

First off, it not effective. There is a common misconception that if you use more litter then you will not have to clean the box as frequently because your feline will be able to have more litter to be able to bury their waste. This is simply just not a good idea because it could actually cause your cat to completely stop using their litter box. Just from looking at the litter box, there may be nothing that needs to be scooped but for your cat who has to walk in the litter box, they will certainly notice their waste. If your cat has to deal with stepping in their own waste, they will not want to use their litter box plain and simple.

Filling up your litter box with too much litter is a waste of money. You will have to buy more litter more regularly and this can quickly add up. It can also lead to your cat kicking litter everywhere. Your cat may try to dig more when the litter is too deep so they can get better footing which leads to more litter on the ground. This will mean it takes longer cleaning up and if your original reason for using more litter was to make the cleaning process shorter then it makes no sense to put too much litter in the box. Also, some cat owners will try to fix this problem with a covered litter box but this just creates more problems like more odor and a cat that doesn’t want to use their box.

Inability To Comfortably Use Their Box 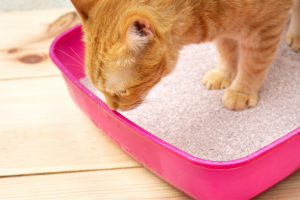 A lot of cats may like to move and turn around when they are in their litter box, but if they are constantly off balance then they will be discouraged to go to the litter box when they need to eliminate.

Another problem with putting too much litter in the pan is that older cats will not appreciate having to walk through deep litter to just use the bathroom. This can exacerbate the pain that senior cats have to deal with, and in turn, your cat may just stop using the litter box.

Keep It Shallow For Long-Haired Cats

Also, keep in mind that long-haired cats usually do not like having deep litter because they don’t like it when litter gets caught in their hair. Just having their hair rub up against the litter is annoying for them.

Check out the list below for some common signs that you might be using too much litter. If these signs are relatable, definitely consider decreasing the amount of litter in the box next time you completely change out your cat’s litter box.

Problems With Not Using Enough Litter

Using less than enough litter can be an even bigger problem than using too much. If there is not enough litter in the box for your cat to cover up their waste then their litter box will quickly turn into a dirty place where they will not feel comfortable taking care of business.

Also, if their waste isn’t covered it will lead to it being pretty smelly and this sucks for both you and your cat. Again, cats are clean creatures so if their waste is visible and stinky because there isn’t enough litter then they will find another spot to go. You are probably trying to avoid as much smell as you can and are wanting to prevent accidents from occurring with your cat eliminating in spots they shouldn’t so filling the box with enough litter is crucial.

If you notice any of these above signs, then it is the right decision to make the litter deeper to see if it improves the situation.

How often should you completely change cat litter? 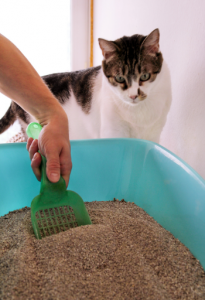 You should completely replace the old stuff with fresh litter and clean the box at least once every two weeks, preferably once a week. If you use non-clumping cat litter, then it should be closer to twice a week. If your preferred choice is clumping litter, then it will be less frequent according to the Humane Society. This is because with clumping litter you can scoop out your cat’s urine while with non-clumping, it just absorbs the urine until it becomes too saturated and then it needs to be cleaned. You should scoop out your cat’s waste a couple of times a day and if possible every time they use the box. If the box gets full with waste faster than what your current cleaning schedule is it is probably best to start cleaning it more often.

What depth litter for multiple cats?

If you are the owner of more than one cat, you should have at least one litter box for each cat and then there should be an extra communal one around. Having the right amount of litter boxes for however many cats you have is important to ensure each cat has a safe and reliable place to use the bathroom. If they each have their own litter box, then just follow the advice from above and go with 2 – 3 inches of litter per box.

The question “how deep should cat litter be” can be a tough one to answer as a cat owner. Finding the right amount between too much and too little can prevent your cat from relieving themselves in spots outside of their litter box. If your cat prefers a shallower or deeper litter box and is displaying signs that the depth of their litter is not fitting what they need, you can adjust accordingly to fix the problem.

Blaine is a pet owner and animal lover. His two passions of cats and blogging met and KittyCatReviews was formed.