The Maine Coon cat is perhaps the oldest breed of cat native to North America, more specifically to the state of Maine where it is the official state cat.  This breed is a large domesticated cat and known for its large size, long hair-coat, and rectangular-shaped body.  The Maine Coon is a big-boned cat, originally bred to keep homes and barns free of rodents, and comes in several different colors and patterns.

Perhaps its most distinctive physical characteristic is its erect, pointy ears topped with tufts of fur. The Maine Coon cat is generally delightful, sweet, and gentle, however, there are some differences between the Maine Coon and other breeds of domestic cats that we will explore below.

But first, we will look more closely at the characteristics of the Maine Coon.

Characteristics Of The Maine Coon Cat

The Maine Coon cat is considered the only longhair breed native to the United States, and historians suggest that this breed was introduced by sailors who sailed to New England in the 17th Century.  These ship cats likely took a little shore leave, bred with existing native cats, and morphed into what we now know as the Maine Coon.

Maine Coons are considered large cats, some males weighing over 18 pounds, and females ranging between 8 and 12 pounds.  They have long hair coats, come in a variety of colors such as tabby, white, black, silver, or cream, and also vary in eye color from copper, gold to green.

Maine Coon cats are also considered the largest breed of cat, and some can be as long as 3 feet.  This breed is known for its muscular build and hardiness, and their thick, long coats keep them well protected during cold weather months. Maine Coon cats are also very affectionate, they make wonderful family companions, and do fairly well with other household pets as well.

They also love being around their humans and can be quite interested in whatever their owners may be doing.  It’s not uncommon to find them waiting outside the bathroom door for you, or greeting you at the door when you return home from work. 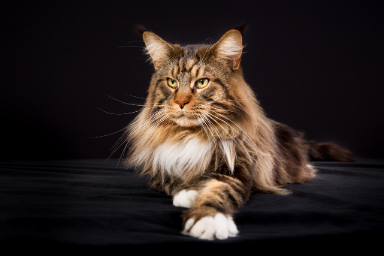 Compared to normal cats, Maine Coon cats are significantly bigger and have a more rapid growth rate than regular kittens.  Maine Coons kittens are also larger and have a bulkier and more rectangular body structure than other domesticated cats.

As kittens, they may appear to be elongated and thin, but their large paws will probably give them away.  As mentioned above, Maine Coon cats average from 8 to over 18 pounds, whereas the average house cat weighs about 7 pounds.

As far as personality, Maine Coons are known for being very affectionate, and more sociable than regular cat breeds. They are considered gentle giants. Of course, this doesn’t mean that regular house cats aren’t friendly and cuddly too, it just means that the majority of Maine Coons are very outgoing and sociable.   This doesn’t mean other breeds don’t have sociable cats, but it’s not as common.

Some Maine Coon cat owners characterize their feline pals as dog-like, affectionate and playful, and claim that they can be trained. A regular house cat can be affectionate, sociable, and trainable as well, but the average cat is in general not as trainable as a Maine Coon.  Maine Coons are purported to be able to learn tricks very rapidly and on the fly.

A characteristic feature of all Maine Coon cats is their long and thick fur coat.  Many Maine Coon enthusiasts characterize the hair coat as shaggy, where some areas of fur may be longer than in others. The hair on the abdomen and legs tends to be longer than on other parts of the anatomy, and the chest typically has a large ruffled area of fur as well.

Many Maine Coon cats develop furry tips to their ears, giving their ears a “pointy” and erect appearance.  They also tend to develop large tufts of fur in their ears as well.

As with other larger animal breeds, Maine Coon kittens remain kittens for a longer time than regular domestic kittens, but, they put on weight and grow in size faster.  Unlike other cat breeds, the Maine Coon grows roughly one pound per month, but it’s not unusual to see a Maine Coon kitten gain 2-3 pounds in a month.

How can I tell if my cat is a Maine Coon? 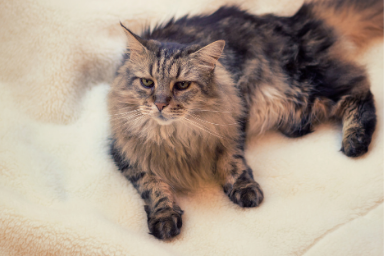 Unless your Maine Coon has come from a known breeder, you may have a hard time knowing if your kitten is a Maine Coon, or has some Maine Coon without doing a DNA test.

Many kittens may look alike in the first few weeks, however, some things can help you determine if your cat is a Maine Coon.

Most Maine Coons have the following physical characteristics:

The characteristics listed above may not be obvious or present at all, and your kitten or cat may have maybe one or two of these traits.  A purebred Maine Coon will most likely develop a very square muzzle and big paws and will contrast with other domestic cats in personality and body build. Here is another article to help identify Maine Coons.

Maine Coons make great family pets; they are good with kids, smart, affectionate, and playful. They are well capable of entertaining themselves, but unlike many regular cats, prefer to have human company and even the company of other pets.

There are many differences between the Main Coon and other domestic cats, but if you don’t mind a bigger cat with lots of hair, this breed can make the perfect life-long companion.